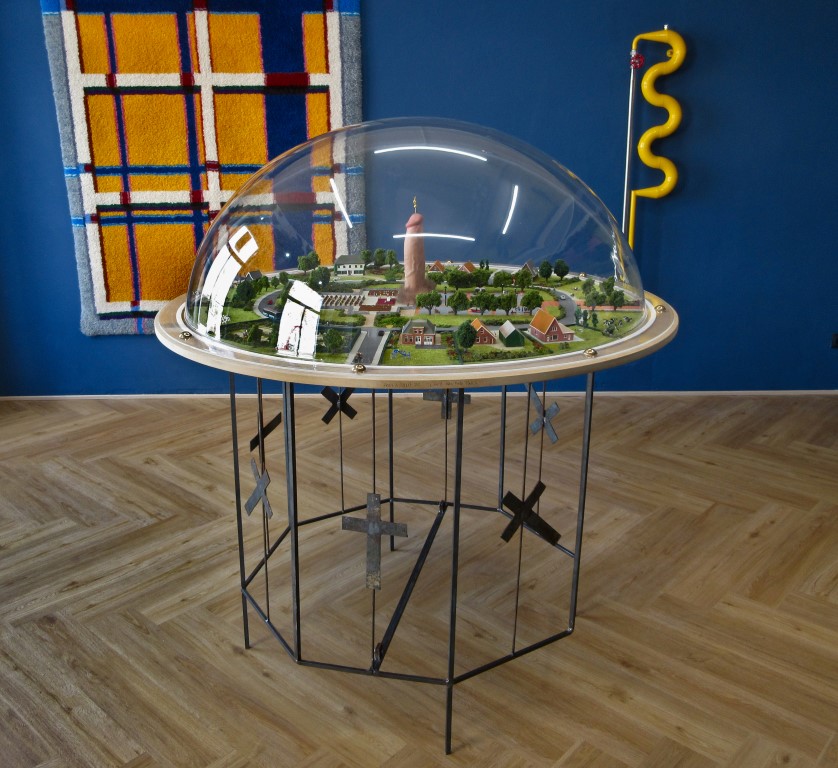 Arnix Wilnoudt
The World Was Made Flesh I
2012, mixed media, ø 135 cm, H 160 cm
In some villages, life follows an old well-worn track. A very specific sense of place is passed from generation to generation. A rhythm of living defined by a dialect, family names, mom and pop stores, bars, parties and rituals. The Church is still the centre of the community here. On a square in the old city centre, a tall bell tower stands, crowned with a golden rooster. Beneath it everything passes along. Often, a local law still makes sure that these towers will remain the highest point on the horizon. Every day is segmented by the sound of church bells and one is guided by liturgy from baptism tot casket.

Christianity is still essential to social traffic here, much more so than in the city. Many ambitious young people head for the hills as soon as they can walk, looking for a place with fewer rules and more chances. A small, often closed-off community is left behind, looking for peace and order in tradition. They do their chores, play with their grandchildren and go out for ice cream on the village square. The doors to the church are wide open, offering a listening ear and words of advice and support. A cloak of charity for the victims of urbanisation. They might need to do without an ATM and the nearest doctor might be an hour away, but service is still going strong on Sunday.

Meanwhile, the church tower stands tall and demanding. It represents the reach and power of the Catholic church and is a very secretive and secluded part of the building when compared to the nave. A transmitter, not a receiver. The sound of his bells travels far beyond the village boundaries like a territorial claim to the herd. It has a long shadow that falls over many small houses and that conceals the less appealing aspects of organised religion. Abuse of power and perverted suffering are not spoken of here. This suffocating silence is represented here by a massive glass dome sealed by screws bearing a Christian cross. A protective measure that guards the village against outside influence, but also makes sure that the flock stays together.

In The World Was Made Flesh I the classic bell tower is substituted by a large phallus. A hyper-realistic silicone penis that triumphally rises from an imposing cloud of pubic hair. A nun behind the altar looks through the hairs at the priests and pious villagers in front of her.  Outside, three women discuss daily affairs in the shade of the erect dick. Everyone suffers through their life and looks away when needed. The whole maquette is made to scale to this display of male dominance.

As a metaphor, this piece has far-reaching consequences. Even the sense of shame or discomfort that many people experience when seeing it for the first time has to be seen in the context of the fall of man. Much of our judgement is still heavily influenced by Christian teachings. When a young child sees this pieces it sees small cows and tiny houses, the hairy thing in the centre hardly catches their eye. As a whole, it is a captivating piece. With an enormous amount of attention to detail, Arnix Wilnoudt playfully switches between vignettes of village life and comical references to stories from the Bible and the skewed balance of power in the Catholic church. A refined sculpture in which one of mankind's most transformative forces is examined with a Dutch sense of humour.

Arnix Wilnoudt (alter ego of Arnoudt Geerards, 1958, lives and works in the Netherlands) is a Dutch artist,.He has been fascinated by the way power works and how it displays itself since childhood. In his work, he combines a kitschy aesthetic with the bigger questions in life and a plethora of references to cultural phenomena. He wants to show his public how power works and how people can be manipulated through symbolism and ritual, without passing judgement. He reuses the shiny treasures left behind by the Catholic church -its monstrances, grails and relics - and infuses them with intimate humanity. His work is exhibited internationally and is part of several key international collections, including the Mehmet Ömer Koç collection (Turkey), the Richard and Alita Rogers Family Foundation (USA) and the collection of the Museo Internacionale di Arte Monterrey (Mexico).