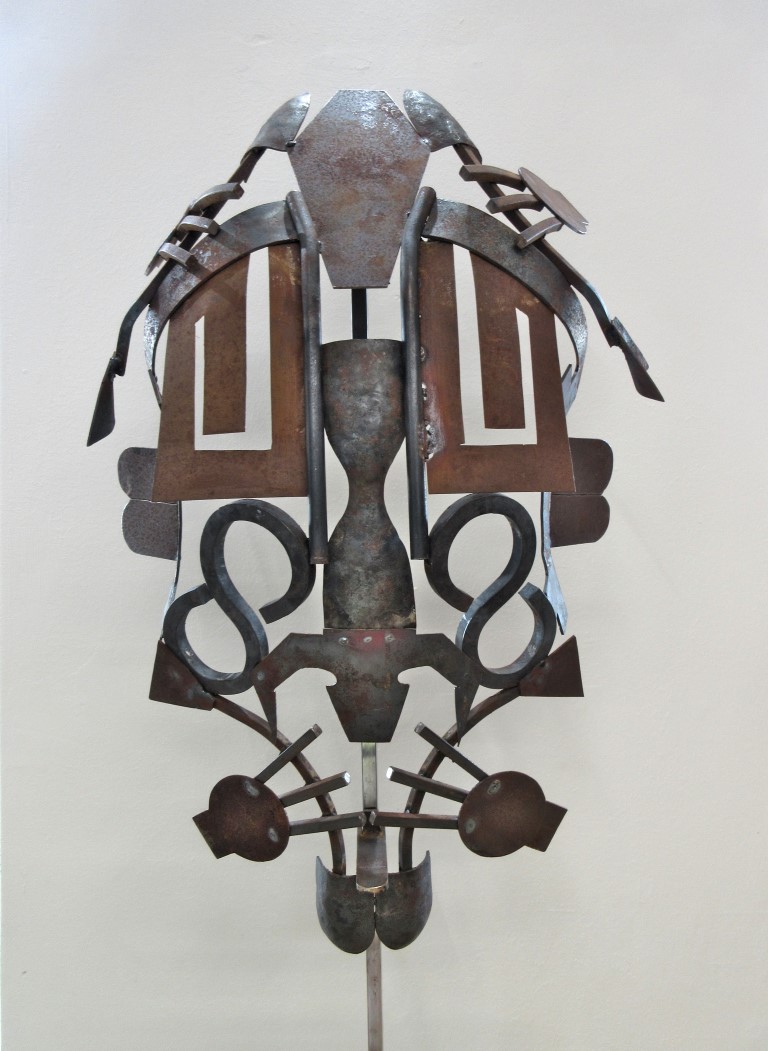 Casper Prager - Mortality, 2017
Corroded steel. 80 x 66 x 25 cm
Putting on a mask is an impressive ritual.
The act triggers a very primal reaction from a very young age.
Both the wearer of the mask and its public feel an intrinsic need to respond to it.
Ones own personality is temporarily set aside to embody the spirit expressed in the symbolism of the mask.
It does not matter if it's a plastic party prop or an authentic shamanic headdress, the need to act the part is definitely there.
Whomever dons a mask in the rich, professional and utterly nonmagical West is effectively performing an act of resistance.
Not in the least because the mask offers one an undesirable anonymity.
Being unrecognizable is currently often interpreted as a license to act inhumanely.
It is counter-intuitive to selfie culture, where the aim is to present a perfect version of the self , not to embody an impersonal entity.
Now that drones are able to recognize faces based on algorithms, the mask can be a rather ironic solution to a society suffering under a surplus of control.
The object itself stands for systems of believe which are deemed primitive, and it radiates the illusion of the metaphysical.
Dangerous stuff.
Still, the mask is a very attractive thing.
Human eyes are magnetically drawn to anything resembling a face.
And perhaps the mask captures a subconscious longing for the cult, for honoring and expressing larger emotions that no longer have an appropriate place in daily life.
In this series of four masks, Casper Prager describes four forces that have an incredible impact on the world: Addiction, Religion, Wealth and Mortality.
Using personal symbolism sculpted in attractive rusted steel he has tried to capture the subsystems and key elements of these grand themes.
The subject matter of these works is so all-encompassing that it can make a human feel powerless and insignificant in a sober world.
Maybe a new appreciation of mysticism can provide us with some relief.
We are able to elevate earthly matters and personal affairs to a larger story of humankind by using rituals.
Donning the mask can be a force to connect us and to provide some shelter for the soul.
Price Range: €1.700,- - € 2.000,-  Contact the gallery about this piece
Casper Prager
http://casperprager.com/
@Casper_Prager