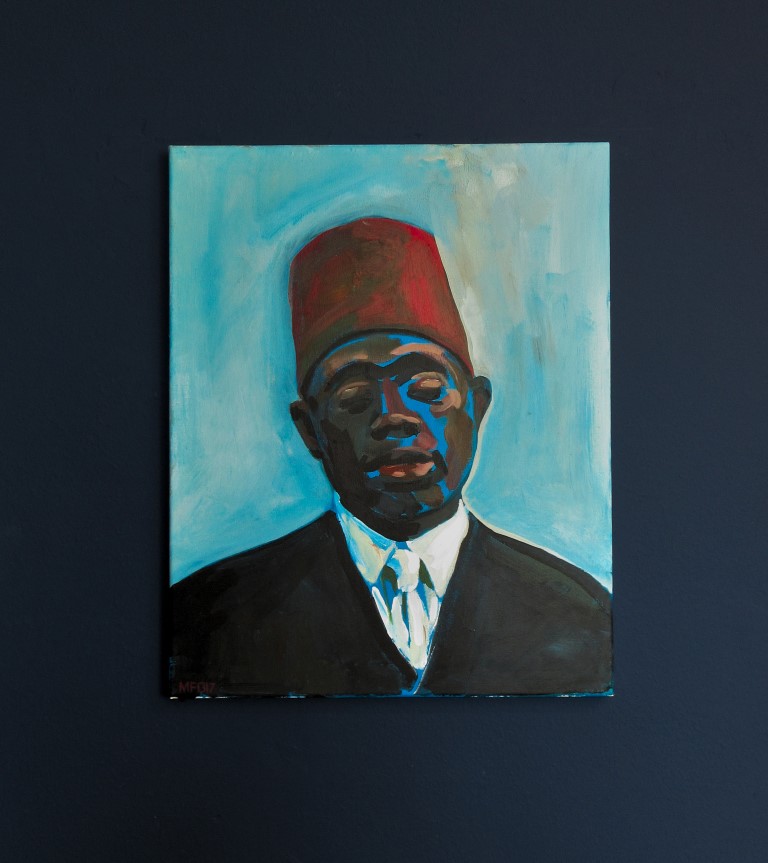 Martyn F. Overweel - Fez is Moor, 2018
Acrylics on canvas, 40 x 50 cm
Martyn F. Overweel is a Dutch illustrator and artist whose work revolves around the concept of reputation. In his drawings and paintings he tries to figure out why certain visual cues have staying power, while others fade away quickly. He is intrigued by the distinguishing facial features, style and stories that form someone's public image. He sees reputation as an strong and amoral force that not only dictates the way we remember and recognize people, but also functions as a template for future reference. Drawing a black rectangular mustache on any face has a very clear connotation. Reputation is an excellent tool to examine the taboo, and to let humor find its way into contemporary art.
As a cartoonist, he needs to define recognizable features in just a few strokes of the pen. If he misses the mark the joke falls flat. Years of experience in this very specific form of precision has resulted in a fascination with the intricacies of outward appearance. In his paintings this interest manifests itself in a style that feels more grounded in admiration than in jest. In a subdued but very deliberate palette he shapes his characters in thin layers of paint. Uniforms, iconic photographs and blunt tabloid headlines are softened and given depth through his treatment of the material. In Fez is Moor the texture of dark skin stands in clear contrast with the rigid fabric of the Fez and the proud silhouette of the suit. It is a portrait of a man, but the costume takes the lead. Proud, satisfied and closed eyes seem adrift in an ephemeral blue void.
Two subjects intertwine here: a painter's fascination with dark skin and the interesting history of the Moorish Science Temple of America. The rise of this American religious movement can be seen as an example of the power of reputation and a defined public image. In the wake of slavery a group of African Americans claimed a new Moorish, islamic heritage for themselves and donned either a fez or a turban. By doing so, they distanced themselves from a traumatic past and from daily oppression in American society. This crafted identity gave them the strength and pride needed to build a functioning community. For Martyn, their highly stylized outward appearance and independence offered a certain legitimation for a painterly interest that might be at odds with the current political climate. He feels that a new taboo has found base in art and he can't suppress the need to test it out.
Price range: € 1.000 - € 1.500,- Contact the gallery about this piece
Martyn F. Overweel
mfoverweel.com/
@martynfoverweel