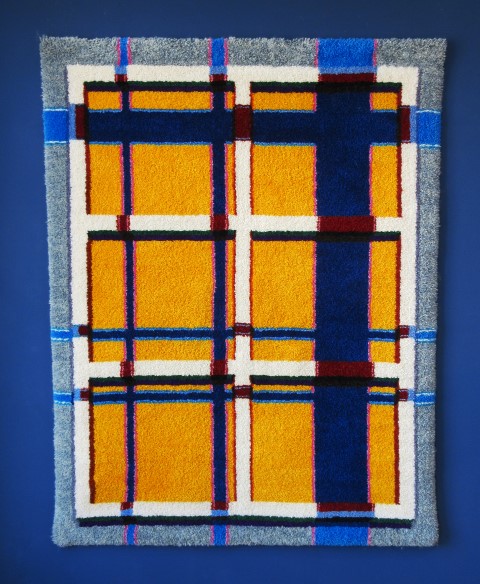 When sunlight falls through the windows of the studio it lands on the backs of stretched canvasses.
The shadows created by metal frames in the windows overlap the wooden cross made by the stretcher bars in an intricate play of lines.
Light draws hard edged lines that curl around wooden surfaces and then dissipate onto the backs of the canvas and the floor.
The fronts of these works were painted during previous months.
Would someone flip them over, they would see a painting of light falling on the back of stretched canvasses.
Very carefully, Mariës has captured an unique moment in the passing of light.
All the intricate shifts in colour that occur when light moves accross a surface captured like a diary of the moving sun.
None of these paintings look exactly like the other, just like daylight never appears in exactly the same way twice.
The intensity, angle and colour of light is influenced by near infinite variables.
Mariës Hendriks has found a clear and concise concept to make use of this limitless source of inspiration.
She paints the way light falls on the backs of her previous work until all possible permutations of this simple scene are captured.
Conceptually linked to the possibilities of a cube by Sol Lewitt, her work proposes a closed system that is virtually impossible to complete.
It is this infinity found in simplicity that makes the work surprise with its conceptual purity.
Her practice is comparable to a meditative mantra.
Repeating a phrase until every singular tone, each articulated fragment is internalized and capable of carrying all its possibilities.
Each of Mariës works registers the smalles detectable vibrations of colour that occur between light and shadow on a set surface.
This carpet can be seen as a key piece in this body of work.
The monumental work is painstakingly hand knotted and clearly shows her devotion to the concept.
Suprisingly, the texture of a carpet is perfectly suited to describe the way vibrant light hits the human eye.
A single frame is hit with a golden bundle of sunlight that breaks upon impact into deep blue, turquoise and even pink and red shades of shadow.
Where one can deduce a sense of scale from her paintings by comparing the depicted objects, here this scale is let go.
In stead, the piece captures a single moment of accumulated light.
The remaining question is if this piece will be flipped around itself, allowing for the sun to hit it in its own unique way.
Price range: € 9.000,- - €11.000,- Contact the gallery about this piece
Mariës Hendriks
http://marieshendriks.com/ 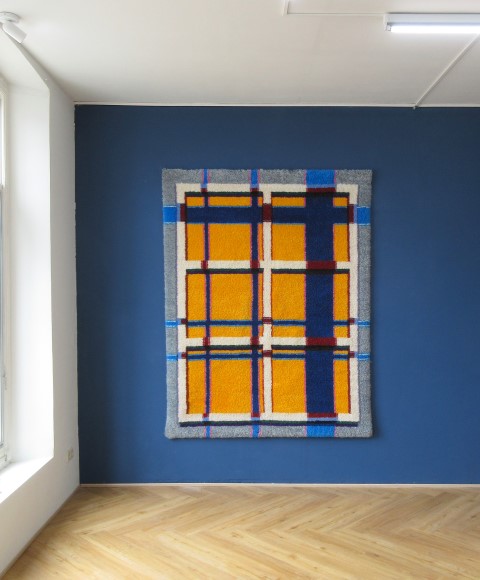